Sign Up Today!
Thanks to everyone who supported and played in the
2022 Jingle Bell Open.

Check out the JBO pictures here!

Check out the SPONSORS of the Jingle Bell Open here!

For those of you who attended the Christmas Parade, thank you so much for making it such a great success!  We hope you enjoyed it as much as we enjoyed putting it together!

The pictures from the parade can be seen by clicking here.

The full video of the parade can be seen by clicking here.

BUSINESS Category
1st -   Hartford Community Services
2nd - Auto Safety Center
3rd -  SKB Lawn Care
PLEASE NOTE:  After an annual review, the Parade Guidelines and
​Competition Guidelines have been updated and are effective 10/1/2017.
Please take  time to read them prior to registering for the parade. 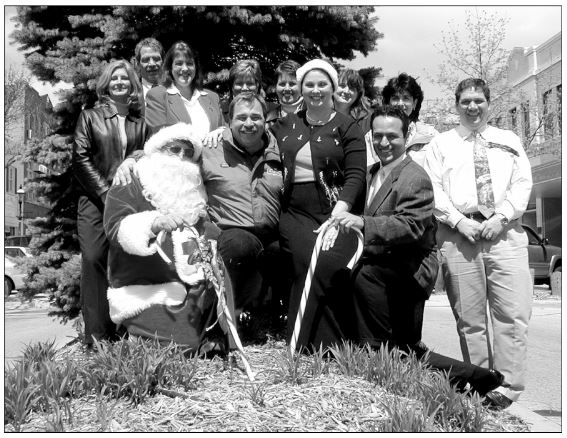 The following story is from the West Bend News:

Last week’s photo was from May 2, 2002, and was named “Christmas Parade.” I expressed surprise that a photo taken in May had something to do with Christmas, but it turns out that it really does take that long to plan a Christmas parade.

We got our first clue when eagle-eyed Daily News ad sales maven Mary Jones pointed out that one of the heads in the back row of the photo appears to be Daily News publisher Heather Rogge — specifically, the head second from the right in the back row.

I asked Heather about this, and she confirmed that it was indeed her head, although she says she wasn’t the publisher then — Steve Ciccantelli was publisher. She said she thinks in May 2002, she was general manger of the Washington County Post (it was called the Sunday Post back then). Being in the photo, I figured she would be able to help us identify everyone in the photo — which she was, with a not-insignificant amount of help from Josephine Minskey Brzezinski, apparently. Get ready for a heaping helping of names: From left, front row, Robbie Robrahn (as Santa), Jeff Szukalski, Josephine Minskey Brzezinski, Cesar Suarez and Mike Husar; back row,
Julie Sears, Steve Ciccantelli, Mary Gamerdinger, Mary Husar Martin, Theresa Fuerbring, Heather Rogge and Carole Klotz.

So what are they doing here, posing for a Christmas event on what is probably a fairly warm day, one of them wearing a full Santa suit that is presumably dripping with more sweat than John Goodman’s bike shorts?
So here’s what happened: In February 2002, the West Bend Area Chamber of Commerce announced it was looking for someone to take over the annual Christmas parade. The Chamber had run the parade for 13 years, and at present it has been a tradition for more than 80 (if my math is correct, and there’s a good chance it isn’t).

So a parade committee was formed to start running the event. It was made up of local business leaders, and was cochaired by Josephine Minskey of Lakeshore Newspapers (the company that includes the Daily News and Washington County Post) and Mary Gamerdinger of the Downtown West Bend Association.

They set up a fundraiser, the Jingle Bell Open golf event, which is still being run to this day
— this year’s event is Aug. 7 at West Bend Lakes Golf Course. This year’s parade is scheduled for Nov. 26.
So there you have it — and apparently, even though this photo depicts an uncommon circumstance, it is not strange for the planning of the parade to begin that early. Heck, it’s not even May yet and they already have information for the Jingle Bell Open and this year’s parade online. Don’t believe me? Go to www.westbendparade.org and get ready to eat crow, weirdly skeptical hypothetical reader.
— Chris Becker
Looking to Volunteer?
The West Bend Christmas Parade is always looking for a few good elves.  Volunteers can get involved for only the day of the parade or be more involved throughout the year with the parade and the Jingle Bell Open.  Click Here to send a message for more information.